Your platform for everything related to Carbon Removals happening during COP27 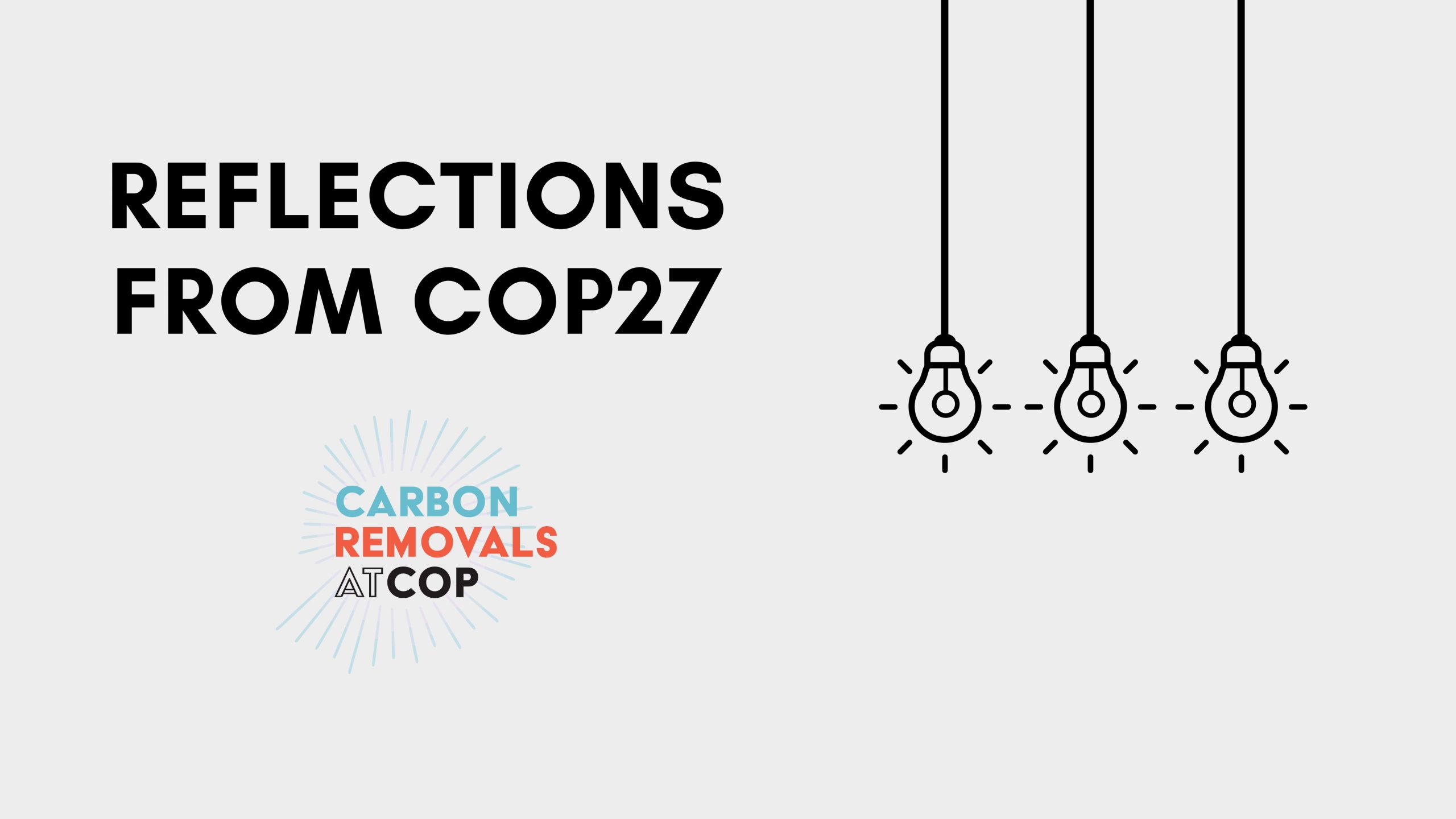 With dozens of carbon removal events throughout COP27, pathways for removal working in tandem with mitigation and resiliency was on display for the last two weeks

The urgent need for climate action to move forward was paramount throughout COP27, including carbon removal. Carbon Removals at COP tracked carbon removal announcements throughout the climate conference and pavilion streamed numerous events and hosted daily briefings with leaders and experts within the carbon removals space.

Loss and damage have been at the heart of COP27 discussions and negotiations, with parties making history at the conference by agreeing to a landmark fund to help vulnerable countries with the immediate costs of climate disasters.

Carbon removals can also play an important role in addressing, loss, damage, and repair to help restore the climate. India’s Minister of Power, Raj Kumar Singh has previously called on developed nations to go beyond net zero emissions to net-negative by removing more carbon out of the atmosphere than they emit.

Carbon removals emerged as a third pillar of climate action during the conference, which would entail reducing emissions as one, carbon removals as another, and finally adaptation.

COP27 concluded with parties being invited to submit their views on carbon removals in Article VI of the Paris Agreement ahead of the next conference. With the United Arab Emirates, the next to host COP, signing a multi-billion dollar strategic partnership with the United States to develop clean energy, including provisions for CCUS, carbon removal is likely to be an important focus area for COP28.

The Carbon Removals at COP pavilion provided a platform for a number of diverse voices, from Global South activists, policy makers, entrepreneurs, to tech startups and has amplified their work, their new technological developments and showcased how we can scale-up carbon removal and do it effectively, fairly and equitably.

There were some notable highlights for carbon removal during COP including;

Carbon Removals at COP platform has catalogued all of these events and announcements. This includes Daily Briefings, where we spoke to a number of experts in the field of carbon removals, from Assistant Secretary from US Department of Energy Brad Crabtree, to Chief Harvey McLeod of the Upper Nicola Band from British Colombia, to Rachel Cleetus, the Policy Director of Climate and Energy at the Union of Concerned Scientist to Mike Green, Director of Climate and Energy Policy for American Sustainable Business Network and many more.

Experts in the industry and those behind Carbon Removals at COP are offering the following comments:

Gabrielle Walker, Co-Founder of Rethinking Removals said: “Carbon Removals at COP highlighted the massive collaboration that is needed across the entire climate movement to get carbon removals to scale quickly and with quality. This cannot be a handful of actors working alone, it is a task for everyone who cares about closing the emissions gap and keeping 1.5 alive.”

Kumi Naidoo, former US Secretary-General of Amnesty International and former Executive Director of Greenpeace said: “We don’t have time to choose between stopping emissions and removing CO2 from the air. We need to do both to survive. To be clear, just a decade ago, supporting carbon removal was unthinkable for activists like me. Many, including myself, thought these strategies would be an excuse for the fossil fuel industry to avoid action. Today, while there is a global consensus that we need to get off fossil fuels, we have no time left to wait. Even if we stop all emissions tomorrow, the problem remains. In fact, the choice between reducing emissions or removing carbon dioxide is one we simply do not have. Rather, affected communities demand we do both, urgently, and equitably.”

Ben Rubin, Executive Director, Carbon Business Council said: “Carbon Removal is cemented as a crucial pillar of climate action in the aftermath of COP27, working alongside reducing emissions and adaptation. With increasing conversations about the role of removals on the global stage and dozens of events about the importance of responsibly scaling up carbon removal during COP27, there is significant momentum heading into 2023. Thank you to Carbon Removals at COP, which became a go-to community resource for all the carbon removal announcements and events taking place over these last few weeks. COP27 had several successes but more work remains: there is a need for increased ambition across all pillars of climate action.”